Living on a bucolic small holding means we can move the animals around the fields according to the seasons, their needs and our fancy.  Yesterday we had a shift around for a very exciting event. Snooty, our rare breed Middle White pig, is due to give birth this week. 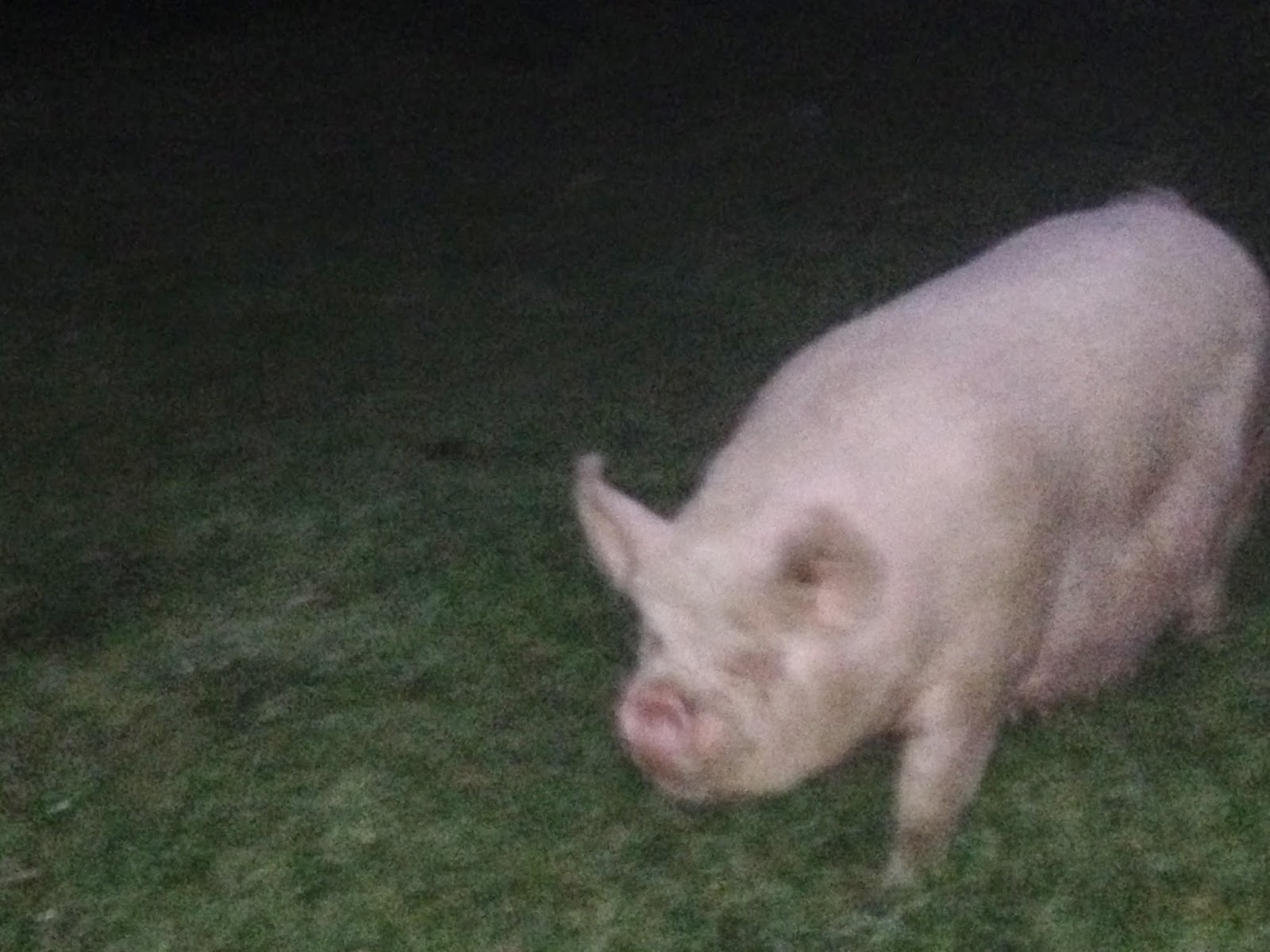 Why we have a pregnant sow goodness only knows (whoever he is)?  We always said we would not winter pigs again after the desperately cold water 3 years ago when we needed to boil kettles just to give them drinking water because everything was so frozen. It was so cold,  Amazon couldn't deliver Christmas presents, and here on the croft, my hand even stuck to the food scoop!  But, when we searched for 2 healthy weaners to fatten for Christmas pigs in blankets and Nigella's Coca Cola ham (http://www.nigella.com/recipes/view/ham-in-coca-cola-171), Stephen, The Kind Pig Farmer, said why not be brave, and have a sow and a weaner instead? 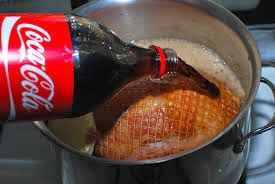 The plan was to fatten the weaner, and then let her go on her festive trip after the sow had her babes, so that the sow would not be lonely (pigs like pigs company you see). Well here is the thing. Snooty is sweet and all that, but we have fallen rather in love with her pal Flossy (yeah, the festive feast, and called Flossy because a guest's toddler thought that she looked like fluffy candy floss). Well, looks like we will have 2 girls and a load of piglets at Christmas and a rude, undressed turkey! 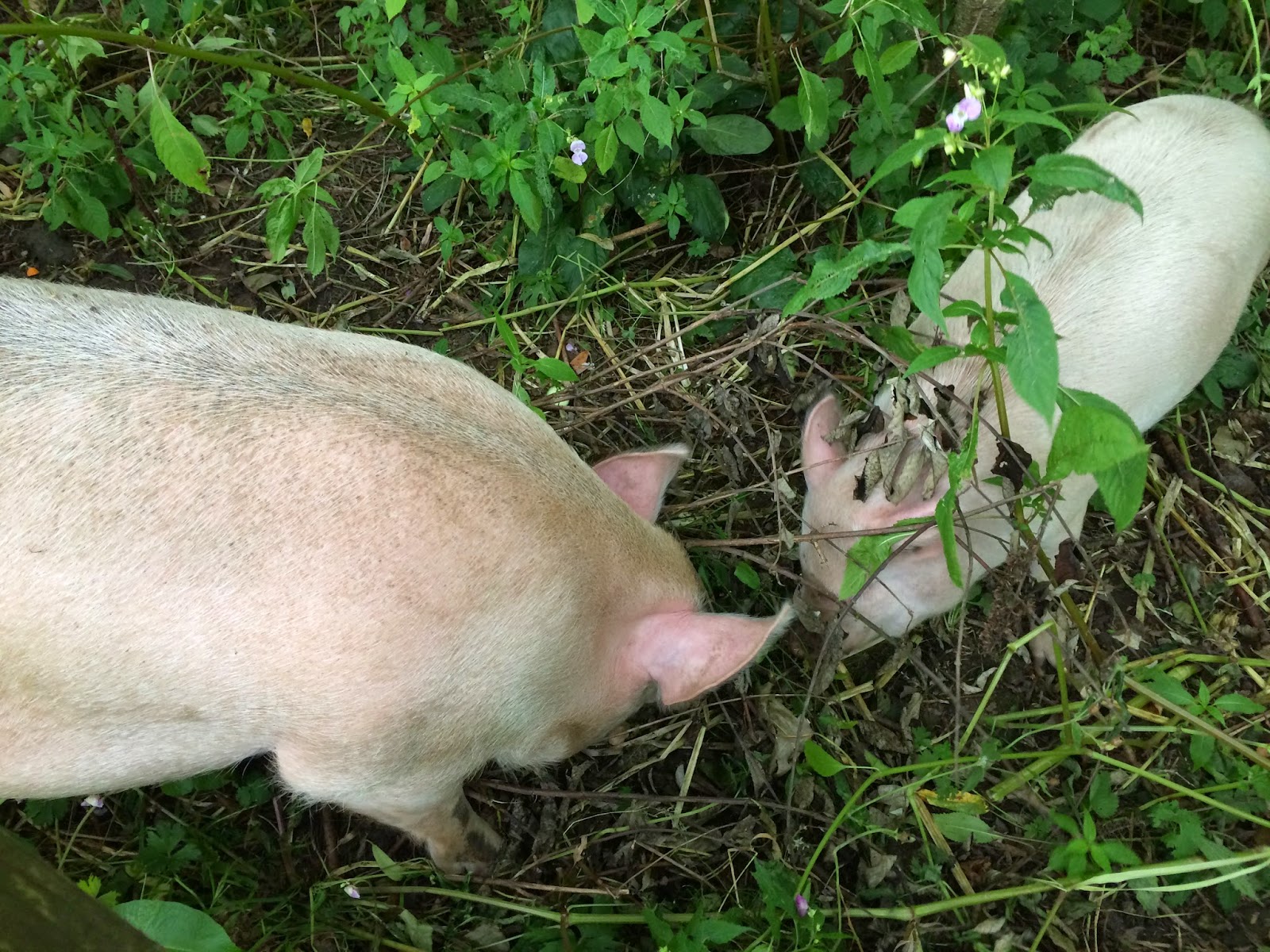 Anyway, we have taken her out of the Hogswarts woods, emptied Pigglywinks and set up the nursery in The Lamb Joint.  Not because there is any special pig-ubator or anything in there - no - its just the pig ark is too low for me to stand up in, and if I am going to have to get involved in anyway, I need to be able to stand up.

So,  Jaspar the pony was teased with apples into the Haugh (that's the river meadow). 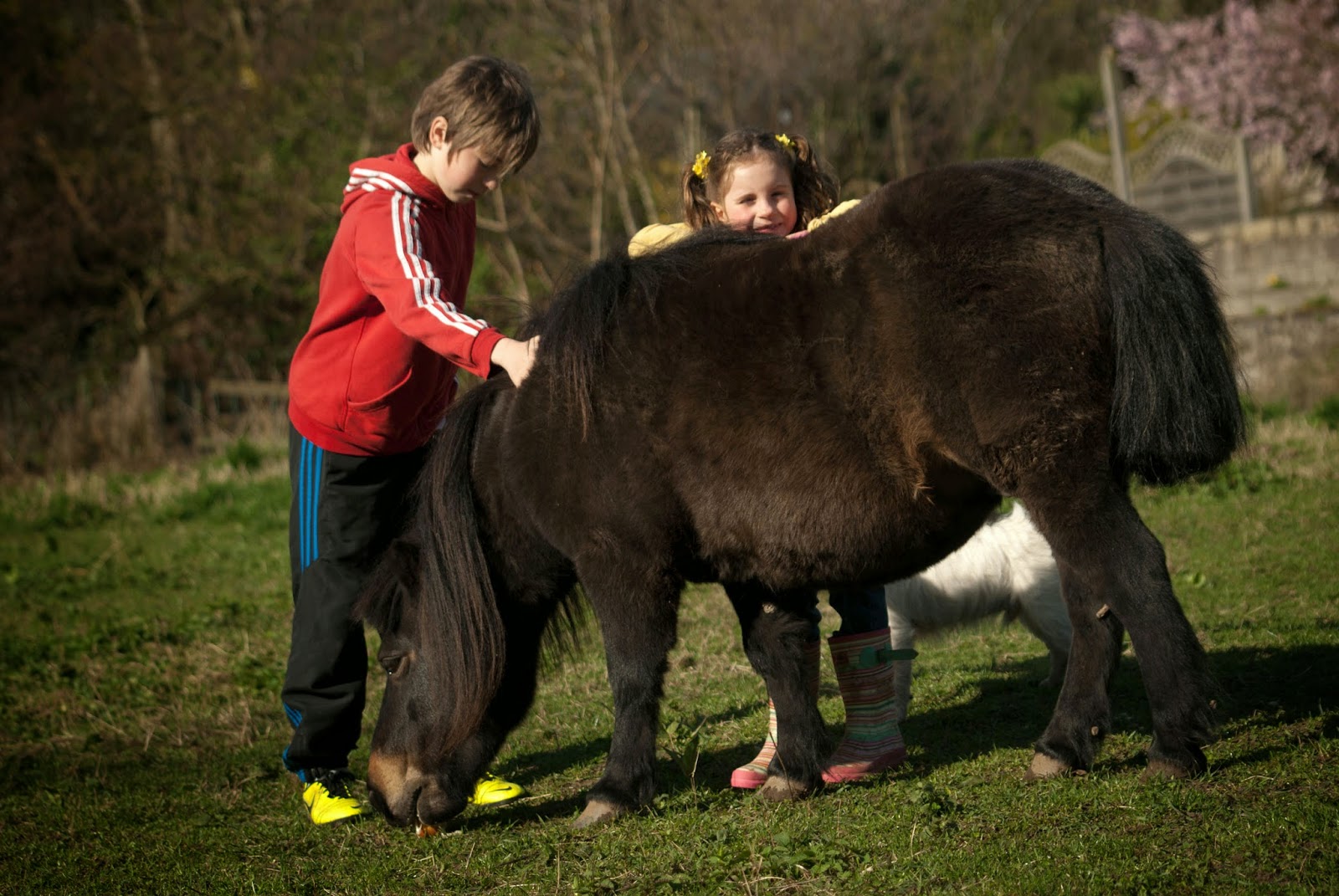 The Kune Kune pigs, Harry Trotter and George Kluney Kluney (the better looking one), were tempted with quince, hay and plums into the orchard. 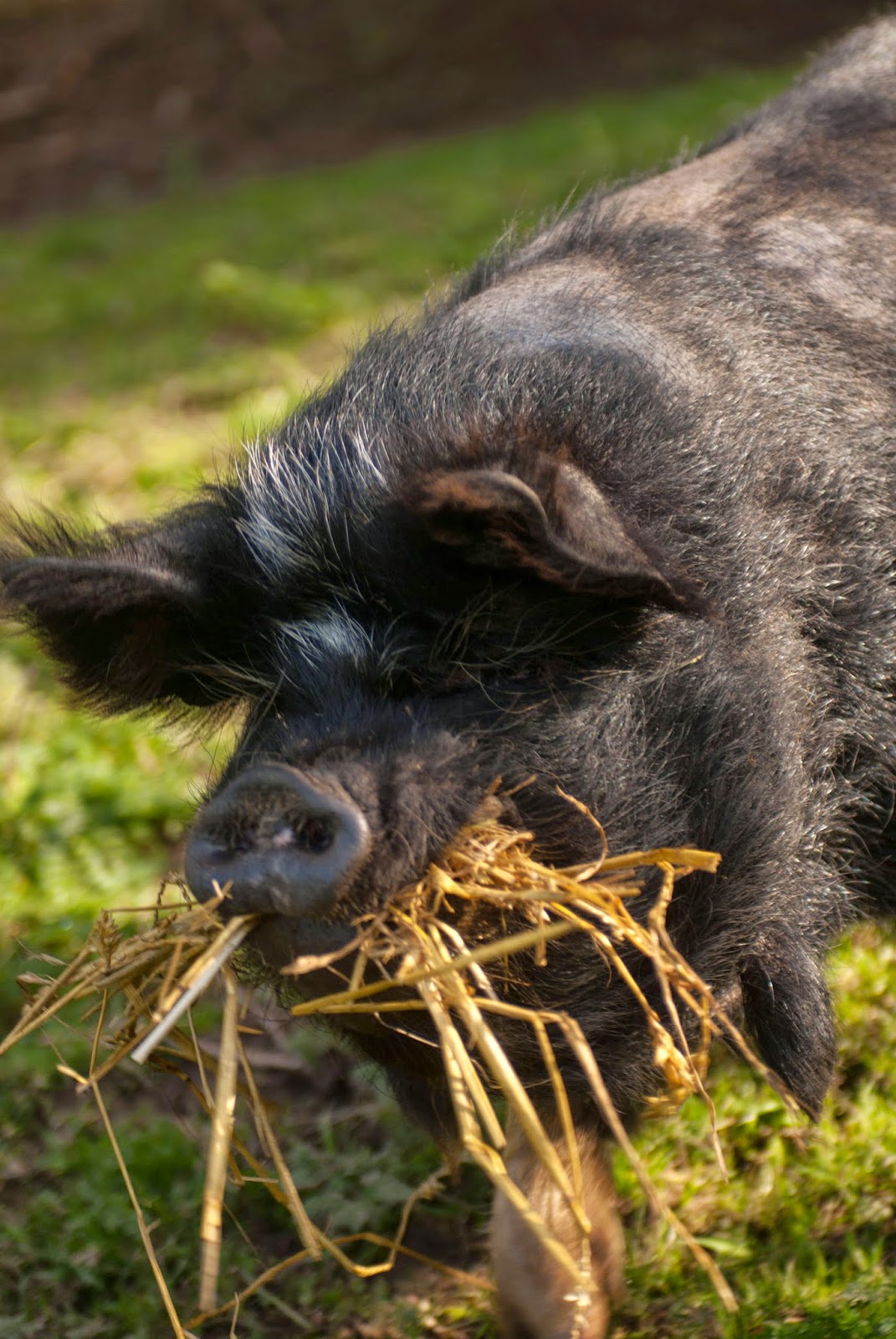 And the sheep herded into the bottom field on the promise of some sheep snax. 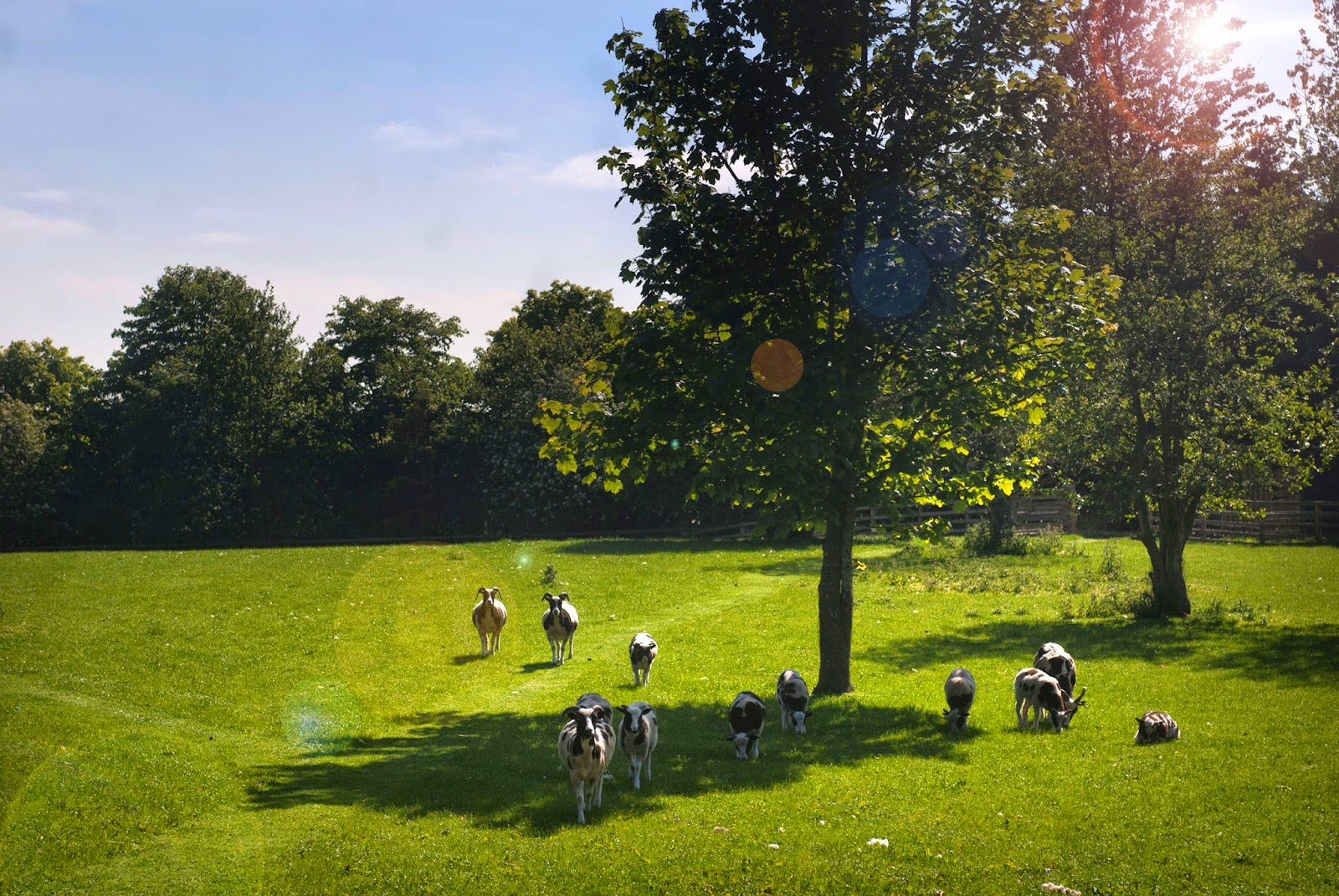 Well, at least that was the plan. But anyone who has any common sense knows that working with animals can be unpredictable. So, Jaspar went to the childrens' play ground, the Kune Kunes got mixed in with the sheep. And the sheep in turn behaved more like cats when trying to herd them, with half the flock in the bottom field, almost all of the rest in the top field and 5 cheeky lambs in the orchard! 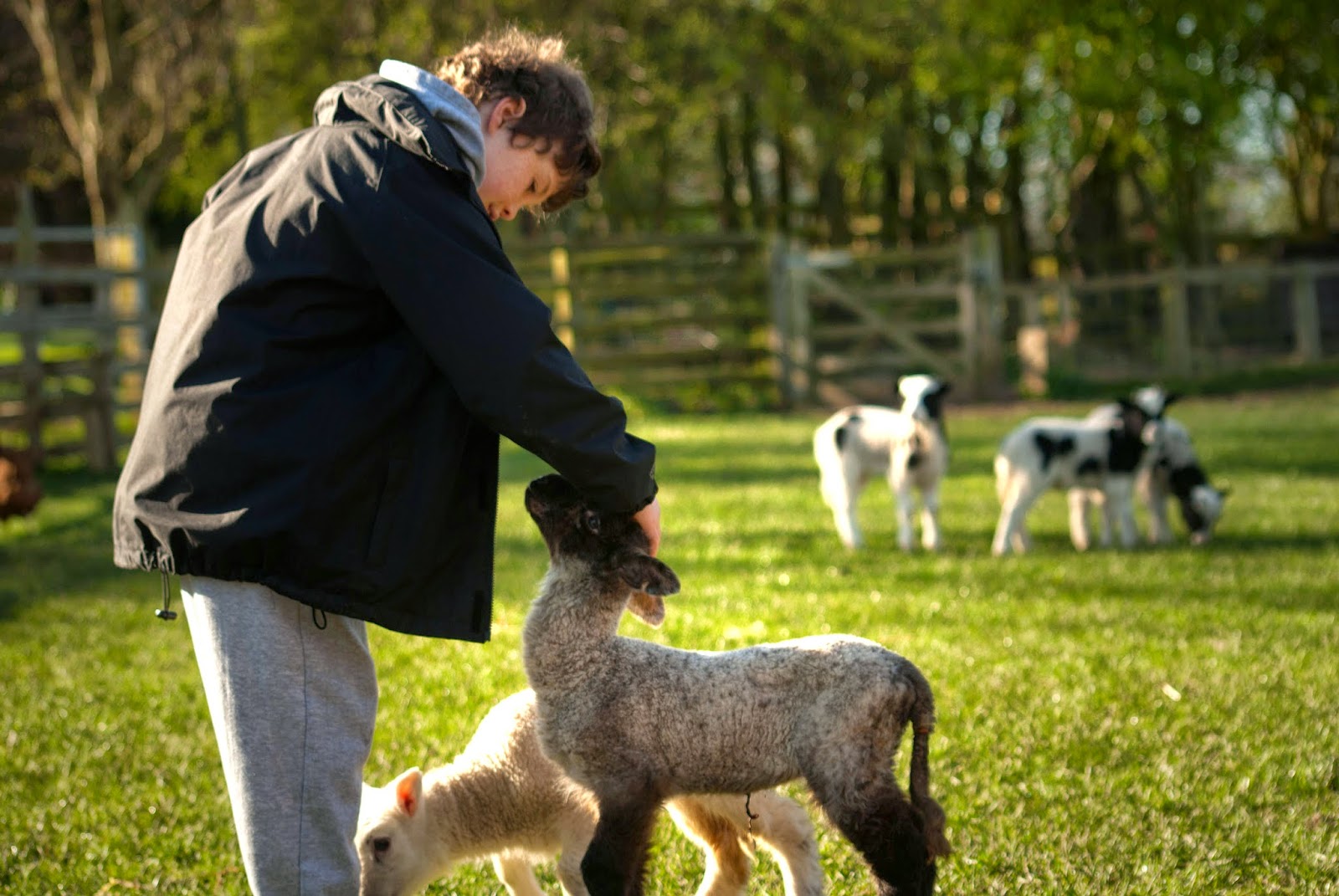 After much shenanigans, we now have the right animals in the right fields, and a pregnant sow getting bigger (and grumpier) by the day.  She has been taking herself off to the shallow parts of the river to lie down and cool off. And she is fighting Flossy for food, ensuring she and her babes get sufficient! 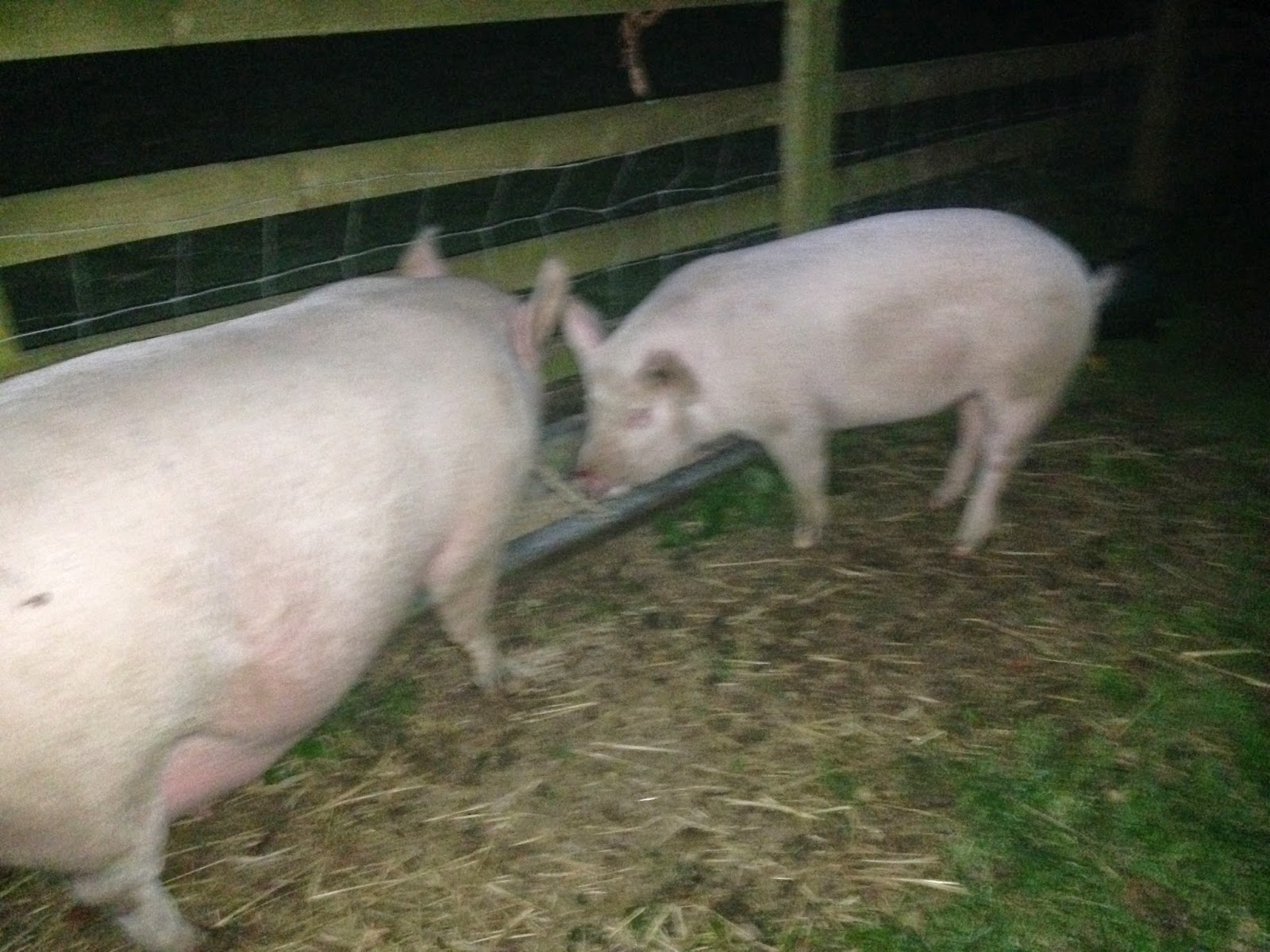 Middle Whites are an interesting breed, very docile, they don't root (which can cause havoc with fence posts) and they enjoy nothing more than being tickled to sleep.  This traditional English rare breed originated in Yorkshire in the late 1800's, and is an endangered line. 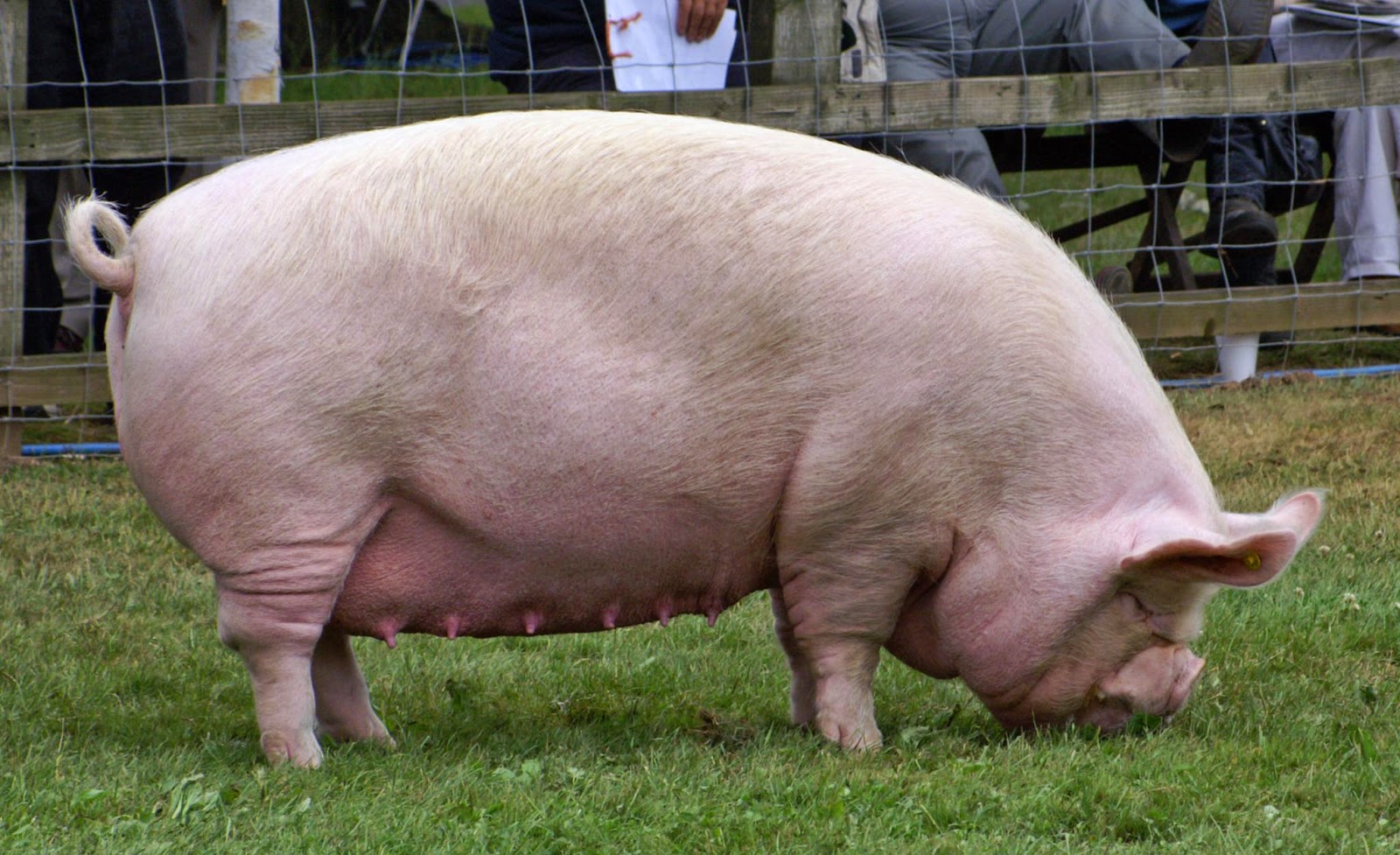 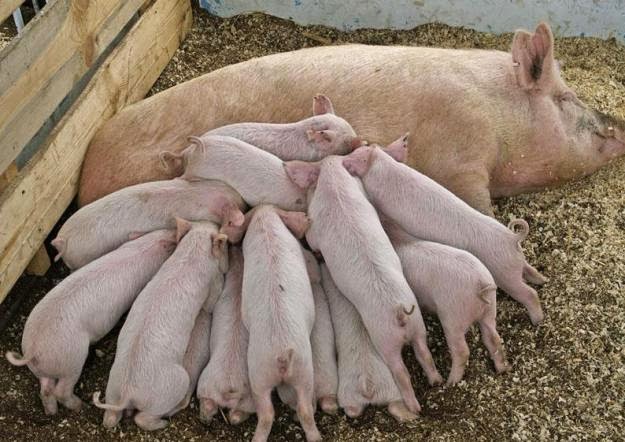 I am also often asked whether pigs need much intervention when they have their young. Again, truth be told, I have absolutely no idea. I have been reading up on the matter (google is a Godsend) and asked around. It does seem like they are similar to our Jacob ladies and just get on with it. But, if there is a problem, they will need some help. And here's my next concern. Is it the sort of help the ewes need, i.e. put your arm in, maybe move the lamb about a bit and then pull it out in a downwards direction with a contraction? Or is it something even more technical altogether? According to The Kind Pig Farmer, they should just pop out like shelled peas.  There might be one that's "sheeted" but apparently I just pull it off (yuk). Some of them might have long umbilical cords too. Now sheep umbilicals just snap off when they are born, and with a drop of iodine, the lamb is protected from infections. However, it seems that with pigs, I might need to cut the cord to 6 inches with scissors and then treat with antiseptic.  Now that sounds all fine and dandy, but The Kind Pig Farmer also went on to advise me that they are slippery little blighters (the piglets, not the cords), so I have to make sure I don't launch them across the stable when I first pick them up!  As it's Snooty's first litter The Kind Pig Farmer said he wouldn't expect a huge number of piglets, probably 7 or 8 absolute maximum and that she may need help at the beginning to get them latched on to the teats.  He went on to say that I shouldn't be surprised if I get stillborn ones at the end, as it's quite normal. I think we will cry. 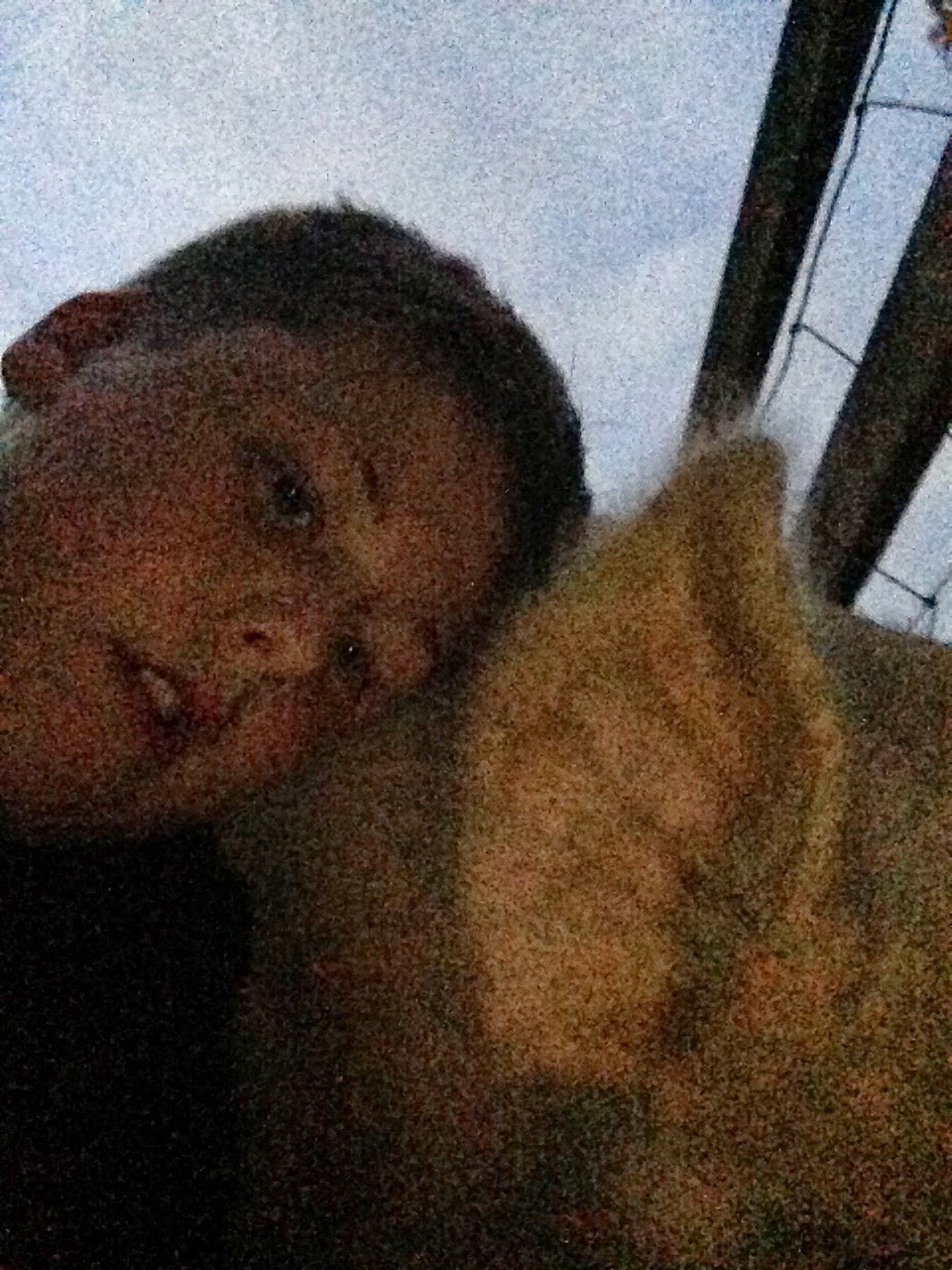 So, several times a day, I am up there, checking her over, looking for signs that she has started to build a big nest with all the straw bedding around. When I see this, apparently she'll be farrowing within 12 hours or so.  And then I will be needing to do need lots of checks. I think our guests will want to see this miracle happen - and it will certainly make their holiday more memorable. The guest who come at Easter time are always enthralled by the new life from the sheep (http://budlebaycroft.co.uk/experience) - such excitement to have it at this time of the year with the pigs!  Let's hope I don't make a pig's ear of it.


For now though, until there is news of the arrivals, the kettles are a-boiling and the blankets are a-warming.  I just need the piglets! 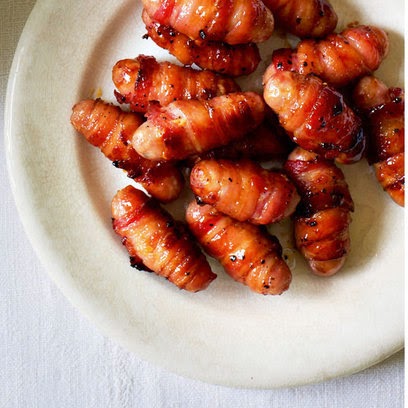 Posted by Allison - Farm 'Stress and General Dogs Body at 05:09